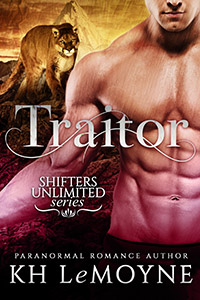 After spending years to orchestrate the perfect revenge, enforcer Breslin Taggart is poleaxed when a woman he doesn’t even know exists steals his final prize and shreds his lifetime of work. He owes her payback, but that doesn’t mean he or his beast will let anyone else get their hooks into her before he’s taught her tempting, sweet ass a lesson.

Rayven can barely keep one step ahead of trouble, much less waste the time to plan an elaborate murder scheme. Yet it’s not like anyone is listening to her. Not her clan. Certainly not the sexy arrogant enforcer who looks at her with equal parts fury and lust. Definitely not whoever framed her. But hauled before the alpha tribunal with everyone she cares about at risk, Rayven doesn’t have much choice but to enter into a battle she never wanted and fight! Unfortunately, winning the battle will rob her of the most precious person in her life.